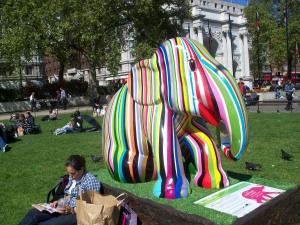 One of 250 artist/designer elephants out and about in London

I write from London. The General Election is today. David Cameron representing the Conservatives and Gordon Brown, Labour, are neck and neck in a pretty exciting horse race.

Despite the campaign speeches and the very first year of televised debates (in the past the Brits have taken the high-minded high road and tried to focus on content-driven messages, rather than sound-bites, faces and personalities), I have only heard a couple of political ads on TV and seen only one poster.

Westcliffe, CO, is heavily Republican. So much so, that it is highly unlikely that any Democrat has a chance of winning. If you are a Democrat and you want to have a say in who is on the ballot, you have to register as a Republican prior to the primary, vote in the Republican primary, and then re-register as a Democrat for the Mid-term or General Election.

It is a convoluted system. The Republicans cry, “foul play.” The Democrats are of a mixed mind. Some change their political affiliations without a second thought. If they want to have a vote that counts, Democrats must register as Republicans to have a voice in chosing the Republican candidates.

Other Democrats (as though the mere label would stain them for life) would rather shoot themselves in the foot than to temporarily call themselves Republicans.

This morning I found a U.K website www.howtovote.co.uk designed to help confused voters choose their party. The homepage lists numerous categories: taxes immigration, civil liberties, housing, etc. I was to check the topics which were important to me.

Next, each topic that I had checked posed three or four relevant statements, and I was to indicate whether I agreed or disagreed. For example, under taxes, one statement read: “No income tax on 1st £10,000,” and a second statement read: “The planned 1% rise in National Insurance is a ‘jobs tax’ and should be abandoned.”

So I worked my way through the survey and keyed in “compute.”

And much to the surprise of my hometown which would probably characterize me as a “flamin’ Liberal,” no one party platform matched my answers.

On taxes, health, defense, and immigration, I matched the Labour platform. On education, work and the environment, my position most closely matched the Liberal Democrats.

And horror of horrors,  based on my answers regarding civil liberties, society, and the economy, I was a card-carrying Conservative. Perhaps I’m more of a Republican than my detractors give me credit for.

So much for labels!

I have lived 100 lives. I write essays, short stories, poetry, grocery lists and notes to myself. If I am ever lost, look for a paper trail, but be careful not to trip over any books that lie scattered here and there. I am a reader. I am a reader in awe of writers. When I don't live in Westcliffe, Colorado, I live in London where I am a long-time member of Word-for-Word - Crouch End.
View all posts by timeout2 →
This entry was posted in politics. Bookmark the permalink.