Let There Be Light

Writers’ Triggers: It’s a Nike ad. The photo shows a portly, black coach wearing plaid shorts. To his right is a scowling youth whose helmet and shoulder pads dwarf him. The copy reads: “He’s not your father. And he’s not your brother. That’s what great about a coach. You can tell him things you wouldn’t tell your father. And he’ll give you advice that’s probably more responsible than your brother’s. Kids need coaches. They need them now.” 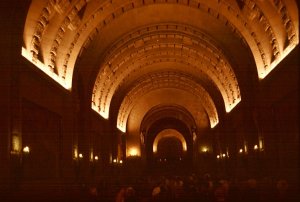 Another stock photo. I’m sorry. In my last post, I mentioned our trip to the Salinas Pueblo Missions in New Mexico. One of the amazing things about the church at Quarai was that the walls were higher at the altar end of the church than the walls on either side of the nave. One of the architectual wonders (keep in mind that the church was built in 1627) was that a clerestory was built into the higher wall- perpendicular to the nave. And as that clerestory faced south, the altar would have been bathed in light.

All of which reminded me of visiting Valley of the Fallen in 1965. The church (or more accurately, the Facist monument) is carved into the bowels of a mountain outside of Madrid, Spain. It was begun in 1940 by Francisco Franco to honor those who died in the Civil War. In truth, only those who supported Franco are honored. Those who died opposing Franco are buried in mass graves all about the country. Franco, himself, is buried behind the main altar.

500,000 died during the Civil War. 900 Americans died serving with the International Brigade. If you haven’t read Ernest Hemmingway’s For Whom the Bell Tolls (or if you haven’t read it since your school years) it is definitely worth a return visit).

But I wander off the point. When you walk into the mountain, the church is darkish. The voices of nuns singing a capella take you outside yourself. The service itself is held in the twilight. But when the priest lifts up the host, a portal to the sky opens and a beam of light illuminates the host. It is very dramatic- a literal take on “let there be light.” (Now there’s a writing trigger. How many interpretations can you think of for “Let there by light”? One choice is to write about an epiphany.)

For many years, those who died in the Civil War lay forgotten (the past is past – let it rest in peace), but today the mass graves of the Republicans who were executed by Franco’s Nationalists are coming to light. There is a lot of soul-searching going on in present day Spain.

Let there be light could also apply to the examination of past atrocities,

1 Response to Let There Be Light