Beyond Hope and Glory

Writers’ Trigger: Some writers start without a plan, and as their characters take on a life of their own, a plot evolves; others make elaborate schematic plans from the very get-go. Neither way is better than the other. It is a matter of personal preference – based more on personality, I think, than on intention. If, however, you are stuck and unsure of your direction, it is very helpful to think your story has already been bought by a film studio, and the director has asked you to write the jacket notes for the DVD case.

Trafalgar Square has been pedestrianized. The street that once ran in front of the National Gallery is now paved. The square, which years ago was home to thousands of fearless, Alfred Hitchcock pigeons, has been reclaimed by the people. The square in now an events space, and the changing exhibits on the Fourth Plinth have added to the square’s draw.

Lord Nelson (who won the Battle of Trafalgar despite having only one eye and one arm and the command of  only 27 ships and 17,000 men to the French fleet’s 33 ships and 30,000 men) stands on a 151-foot column in the middle of the square. Three surrounding plinths are occupied, but the fourth plinth, (erected in 1841 to support an equestrian statue) never saw completion for lack of money.

And so the fourth plinth stood unadorned, until the notion of “the people’s plinth” (that would be what I call it) came into being. Over the last few years, the plinth has been an open competition for an ever-changing exhibit. Below is a picture of the current exhibit: Lord Nelson’s HMS Victory in a bottle.

The installation is by Anglo-Algerian Yinka Shonibare. The model of the HMS Victory is 1:30 scale. Quoting the Arts Council, “the batik sails explore the legacy of British colonialism made possible” by Nelson’s winning the Battle of Trafalgar.

My favorite installations are those with a political message. Submissions for the next installation are on-view in the Crypt of St. Martin’s in the Field. Viewers are invited to take a look and vote for their favorite. My choice is the young boy on the rocking horse. 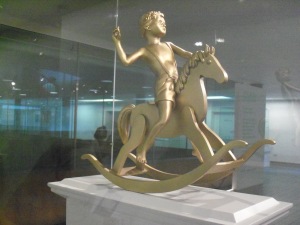 I love the innocence of the child soldier – charging off to battle on his rocking horse. The sculptor Yinka Shonibare got the politics just right. It is all too true to life. I’m reminded of an early U.S Army recruiting motto: “Join the Army and see the world!” As if that is all young boys are going to see.

In The Independent Magazine this weekend, photographer Tim Hetherington and writer Rob Sharp teamed up to do a photo essay titled “Combat Fatigue.” The soldiers pictured were a 15-man platoon of US paratroopers serving in Afghanistan’s Valley of Death.

The photographs are gripping. All sleeping men look the same. Naked. Vulnerable. Skin thin. Men without countries. Babies who some years ago were at their mother’s breast. Secure at that time. Not secure at all today.

To see the trailer for Tim Hetherington’s award winning documentary on the same subject, go to www.restrepothemovie.com.