Writers’ Trigger: If you don’t already have a picture file, you should start one today. Picture files are particularly handy if your morning pages loom like a rainy day. If your writing looms, go through your picture file until a photo catches your attention. Use that picture as your starting point. Flesh out the character answering 20 or so questions. When and where was he born? Who were his parents? How were they employed? What was home life like? Dig a bit.

A couple of days ago, I took the picture to the right. Apologies to the artist: I neglected to write his name down, but the gallery space was the Wapping Hydrolic Power Station built in 1890. I think this photo suggests many possible characters. If you don’t have a photo file at-hand, use this photo for today’s morning pages.

For those who write without first outlining the plot, consider Flannery O’Conner’s words: “If you start with a real personality, a real character, then something is bound to happen; and you don’t have to know what before you begin. In fact, it may be better if you don’t know what before you begin. You ought to be able to discover something from your stories. If you don’t, probably nobody else will.”

St. Paul’s Cathedral is not my favorite church. It is large, cold, and sterile. On the other hand, that does not keep me away from the Whispering Gallery some 257 steps (30 meters/98.4 feet) above the cathedral floor and 55 meters/280 feet below the Golden Gallery at the top of the dome but beneath the spire. The immensity of the space is an architectural wonder.

Sitting in the Whispering Gallery you find yourself someplace between. Weekends are a poor time to visit because too many whispering tourists clutter the drum’s perimeter (first the drum and on top of the drum, the dome). Lips pressed to the outer wall, they whisper to their friends across the way. The sheer inanity of their whispers depresses me: “Evelyn, raise your hand… Edward, show me four fingers… I heard you laughing, Michael… Can you hear me, Rebecca? Speak clearer.” It seems to me that they should be saying something more weighty. 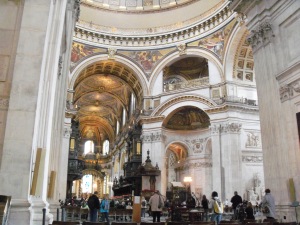 More in keeping with the scale of the building. More philosophical… more considered. I find “Show me four fingers” a bit depressing.

As to scale, the Whispering Gallery is at the top of the picture to the right. Compare that to the size of the people below. I prefer to sit in the Whispering Gallery early in the day during the week when I am mostly alone. Only then can I appreciate the work of Sir Christopher Wren who (after the Great Fire in 1666 that destroyed two-thirds of London) was commissioned to rebuild 51 churches.

Beneath the nave lie the crypts of Lord Wellington and Lord Nelson. Christopher Wren is there, but off to the side. Lord Nelson takes center stage – directly beneath the dome. The curious thing about Lord Nelson’s sarcophagus, is that it was originally built prior to Cardinal Wolsey’s death. But politics being what they were, Wolsey fell out of favor when he was unable to convince the pope to annul Henry VIII’s marriage to the barren Catherine of Aragon.

Given no leeway (“A son… a son… my kingdom for a son!”) Henry’s only option was to break with the Pope, divorce himself from the Catholic religion, and re-brand his church as Anglican, a church that would allow him to remarry. So Wolsey’s sarcophagus was not used for Wolsey. Rather, it was set aside. Only to be pulled out of cold storage 275 years later for Lord Nelson. 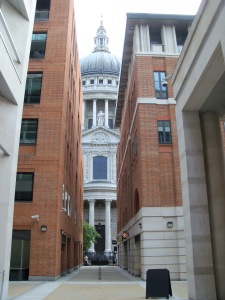 Waste not; want not.