David Huddle‘s poem “Burned Man” tells of a young boy watching his father talk to a horribly scarred former employee who was burned in his factory. The last five lines conclude:

They’d stand there talking in the town’s /blazing sunlight, the one whom fire / had taken to the edge of death / and the other invisibly / burning while they passed the time of day.

We’ve all had those uncomfortable moments when we’ve been confronted with another’s pain.

Everyone was pretty surprised when London landed the 2012 Olympics. London made the short list, but Paris was thought to be a shoo-in.

So, when the torch was passed to London, the question arose, Why London? I am sure that there were a number of reasons, but I remember reading that the Olympic Committee had decided to broaden its mission. The host city would not necessarily be the most obvious choice; rather, the host city would be the city most in need of investment and re-development.

Given that explanation, London was the obvious choice. It’s underground is a living history museum. On one hand, having the oldest subway line in the world, is pretty cool; on the other hand, anything that old is bound to be creaky and outmoded. The World’s oldest Underground was built, not by tunneling, but by cut and cover. 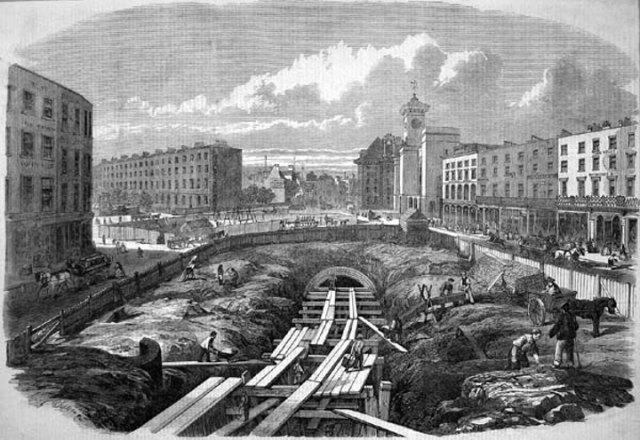 When I think of four billion ticket holders all destined for the Olympic site, I can only shudder to think how they’ll get from point A to point B.

As for the East End itself, it has been in need of investment since the beginning of time. Because the prevailing winds blow in from the west and Central London has always aspired to genteel commercialism, industry was situated to the east of the city where unsavory people and smells would not offend.

The East End was the first (and sometimes the last) stop for desperate immigrants who were attracted by the factories and sweatshops that welcomed (and took advantage of) unskilled labor. And there poverty and slum life bred disease, crime, and prostitution.

Politicians turned a blind eye. Why worry about a non-English population when there were plenty more where they came from? Despite the fact that 30,000 died of cholera in 1830, sewers did not come to the East End until the 1860s. It was an appalling place.

If you go to http://eastlondonhistory.com, you ‘ll find a most excellent website that covers the fascinating history of the East End.

As for the Olympic site plopping down in an impoverished part of town, will the urban development be a plus or a white elephant? Urban renewal is always a mixed bag. Typically, the Yuppies move in and the dispossessed are forced out. In the case of the Olympic site, there were very few homes. The “brown site” consisted of derelict buildings, worn-out tires, broken down cars, refuse, and so many cats that it took six months to catch them all.

Only 100 families lived on the 500-acre site. The buildings constructed to house the 16,500 athletes have been designed for reconfiguration. At the conclusion of the Games, the same buildings will accommodate 2,800 families. A new school will serve 1800 children. The new Westfield Shopping Center will feature 300 shops.

Needless to say, developers who have a good nose for a good thing have been sniffing out building sites along the 500-acre perimeter of the Olympic site. Sensing a good opportunity, they too have been erecting buildings on speculation. Note the photo to the right.

With water features, parks, shopping, sports facilities, housing and transportation links to the city, just perhaps the Olympics coming to London isn’t such a bad idea after all.

This past Saturday, I went on a tour to see for myself. Unfortunately, the tour that I took only went the perimeter of the site. You, however, can learn from my mistake. Take the official Olympic tour. If you are based in London, you can tour the site, for free, by calling 0300 201 2001 Monday through Friday between 9:00 -5:30. The tours are conducted on weekends; you will travel by a 30-seater bus; and the tour will last about one hour. Photography is allowed; video recording is not. But be forwarned – the tour is popular. If you book now, you’ll wait about two months before you actually visit the site.