All the Lonely People

Today is Dorothea Lange‘s birthday (1895-1965). If you know her work, you know her iconic Great Depression photo “Migrant Mother, Nipomo, CA 1936.” Employed by the Public Works Administration, Lange was hired to document displaced farmers during the Dust Bowl years. 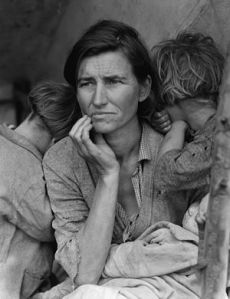 Of the “Migrant Mother” photo, Lange said, “She sat in that lean-to tent with her children huddled around her and seemed to know that my pictures might help her, and so she helped me. There was a sort of equality about it.”

I find this comment really interesting because when I take photographs, I am squeamish. I am afraid to invade the subject’s space – to show the rawness and pain – to show more than the subject is willing to show. 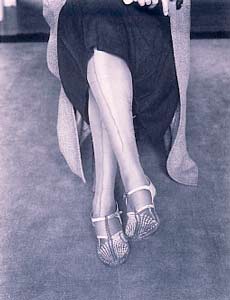 Writing in Aperture (a photography magazine co-founded by Lange) I.A. Schwartz wrote: They say that you have to be careful – because cameras do take souls. That must be the secret – the only way she was able to work her way into the souls of people. She knew she was in the soul-catch business, so she got good at it.” <www.ralphmag.org/lang>

“Mended Stockings,” the Lange photo to the left is interesting in that we do not see the sitter’s face. Do we see something of her soul or not?

The notion of soul-catching is a key concept for writers as well. Consider the following writing prompts:

I haven’t taken the beggar’s picture, but he haunts me. Hat-in-hand, he sits on the pavement outside the Queensway Tesco. The seasons pass. He is a constant. His sitting outside the grocery makes me extremely uncomfortable. There I am… going into the store not only to buy toilet paper but also to buy food – not only essentials but also treats: perhaps fresh strawberries or gelato. The guilt is almost too much. The yawning gap between the haves and the have-nots.

To make matters worse… to up the guilt-factor, he doesn’t ask for spare change. Rather, he says, “Have a good day.” When, I wonder, was the last time he had a good day? What would his good day look like?

And yet I do nothing. Sometimes I approach the store from the south to avid walking past him sitting to the right of the entrance. That’s cowardly. I give money to street musicians, why can’t I give to him? Perhaps it is because he has been there so long. Long enough to be offered help by a homeless charity. Perhaps I have been taken advantage of too many times.

Just yesterday, I was passing Euston Station on the Friends Meeting House side of the street and a young girl, disheveled and crying her mascara running, dashed up breathless and grabbed my arm. She had just had a fight with her boyfriend who had man-handled her and torn her Sainsbury’s shopping bag. She showed me the torn bag. Could I give her £4.60 Tube fare to get home?

Instantly, from the very first, I was on my guard. I was well acquainted with this emergency Tube fare home ploy. I had been stung before. And what did I do? I gave her the fare.

I’m not only confused; I’m inconsistent.

I’m out of my depth.

1 Response to All the Lonely People