Today I took in a lunchtime concert at St. Martin-in-the-Fields, but prior to the concert, I ate a sandwich in Trafalgar Square. I sat below the fourth plinth which is home to changing exhibits. Today I sat below a 1:30 scale model of Lord Nelson’s flagship, the H.M.S. Victory which the artist  encased in a glass bottle.

If you haven’t noted the bronze statue of Lord Nelson lording it over Trafalgar Square, you haven’t looked up. Standing 169 feet above the pavement, Nelson is still a national hero – remembered for the Battle of Trafalgar off the coast of Spain in 1805. Leading a fleet of 27 ships against 33 French and Spanish ships, he won the battle, but the icing on the cake was the French and Spanish lost 22 ships; the British lost none.

A little less than a year ago (Sept. 14, 2010),  I blogged “Beyond Hope and Glory.” In it I explained why (after voting for one of five possible contenders for the fourth plinth) I preferred the statue of the boy on the rocking horse to the scale model of Lord Nelson’s flagship, the H.M.S. Victory.

Needless to say, when the votes were counted, the boy on the rocking horse lost out to the replica of Nelson’s ship in the bottle. But now that I have travelled to Portsmouth and seen the real H.M.S. Victory, I’m willing to… not exactly say that I was wrong to vote for the boy on the rocking horse… but I’m willing to say that I have a new appreciation for Nelson, his flagship, and the artist’s intention to address the topic of multiculturalism in Britain. 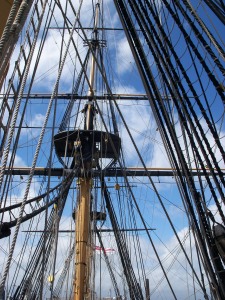 What is it to be English? The artist, Yinka Shonibare, a British Nigerian, addressed this question by making the 37 sails on his model ship out of 37 different swatches of patterned fabric that he bought at Brixton Market.

The fabric is based on Indonesian batik design, made in Holland, and sold in West Africa. The H.M.S. Victory was a British ship, but the sails represent the ethnic diversity of modern Britain. The Battle at Trafalgar allowed England to rule the seas and expand her Empire; it also opened the door to multiculturalism.

But least we get into a flag-waving frenzy, the other side of the coin. (And before my British friends get all hot-and-bothered, let me say that American has any number of two-sided coins.) 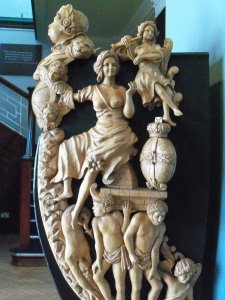 Port Side of Figurehead

In Portsmouth’s excellent National Museum of the Royal Navy, I saw any number of interesting exhibits. For example, a copy of The Victory’s original figurehead. Center stage we have King George III. To the left we have Britannia “trampling on Discord and being crowned by Peace.” Looking at the figurehead from the right, you see “Victory trampling Rebellion.”

I also found the slavery exhibit interesting. With the thought of ending British slave trade, the British navy sent the first anti-slavery patrols to Africa in 1808. By 1819 Britain had established a station on African soil. By 1847, the station was home to 30 ships and 2,000 officers and men who were supported by 1,000 native Africans.

As is often the case, the policy had unintended consequences. First, patrolling a 3,000-mile coast proved to be impossible. Second, Malaria and Yellow Fever ran rampant. In the worst case, 123 men of the 135-man crew on the H.M.S. Eden died within four months.

Ignorance as to the causes of Yellow Fever and Malaria was a problem. So much so that in 1830 Surgeon McKinnel of the H.M.S. Sybille drank a pint of black vomit from a dying sailor just to prove that the vomit itself was harmless.

As for the efforts of the Royal Navy to stop the slave trade, very few ships were caught. Those slavers about to be captured shackled their cargo and threw the slaves overboard. Although the West Coast of Africa Station was built with the best intentions, the outcome was not a successful.