Through a Wide Lens

Lushness at the intersection of Macy and Horn Creek

This morning I find myself reflecting more on myself than the world outside. All this thinking (or more accurately mulling) comes from a Saturday evening dinner peopled by Sustainable Way/permaculture folks. They are a focused passionate people. And I… other than being passionate about books and words… I am seriously lacking in focus.

My chimney, my owls

This rumination on passion really began on our trip to Peru where we travelled with some serious birders. While they were sorting out sub-species, I was saying, “Oh look! A red and orange bird!” I was seriously out of my depth. And at the same time, I had little inclination to increase my knowledge. I know a robin when I see one.

And then his morning, sorting through my clippings, I came across a June 12 article from The London Sunday Times.

BBC Radio 4 had asked listeners of “Castaways” to choose eight discs to take with them to an imaginary island. And this year’s highest scoring choice was “Lark Ascending” by Ralph Williams. Written in 1914 at the outbreak of WW II, it was described by Richards Brooks, Arts Editor, as “a quintessentially English piece of music.”

Because I was totally ignorant of the piece, I turned to the Internet, typed in “Lark Ascending,” and listened to a number of violinists play the piece. It is a lovely, day-dreamy tone poem – accurately capturing the essence of a lark. Nevertheless, it is not to my taste: certainly not one of my top musical selections. But it scored highest! Who are these people? Would we have anything to say to one another? We seem so far removed. Day-dream? I don’t day-dream.

According to the program notes, Vaughn Williams based his music on a 122-line poem written by George Meredith in 1895. Again I was wallowing in ignorance. So it was back to a computer search.

And I love the poem! Technically, it is written in rhyming couplets with four iambic feet per line. Beyond the mechanics, the poem sings. I marvel at Meredith’s powers of observation and his ability to translate his observations into words. I’m not about to copy all 122 lines when you can find the poem yourself, but just a taste, the first eight lines, for the non-poets who do not know the poem or who may not look it up.

He rises and begins to round. / He drops the silver chain of sound / Of many links without a break, / In chirrup, whistle, slur and shake, / All intervolv’d and spreading wide, / Like water- dimples down a tide / Where ripple ripple overcurls / And eddy into eddy whirls…

I love “the silver chain of sound” and “water-dimples” and “eddy whirls.” There is so much to like.

Towards the end of the poem, Meredith moves from the specific to the general (with intimations of the war): In them, that song aloft maintains, / To fill the sky and thrill the plains / With showerings drawn from human stores, / As he to silence nearer soars, / Extends the world at wings and dome, / More spacious making more our home…

If the music and the poem are joined at the hip, how is it that I can like the music so little and like the poem so much? I listened to the music again and I liked it better – better because the notes floated above the bedrock of words.

I don’t have a key passion: I am more of a generalist. I flit from subject to subject, never landing too long on any one topic. I am a weaver of loose threads. My work is not a tapestry. It is more a serviceable and colorful rag rug made up discards. It is not museum-quality.

But it suits me. I’m spoiled by choice and wonder. I’m like a child with five cents. I stand before the glass jars of penny candy. How can I possibly choose? I climb Promontory Ridge at the south end of Centennial Ranch. I look south to Huerfano County and on a clear day (the photo below was not taken on a clear day) north to the chalk cliffs of Mt Princeton. The wind drives me to my knees. Scraps of sights and sounds and the smell of oven-baked earth assault me. I experience sensory over-load. I cannot zero-in on one passion. 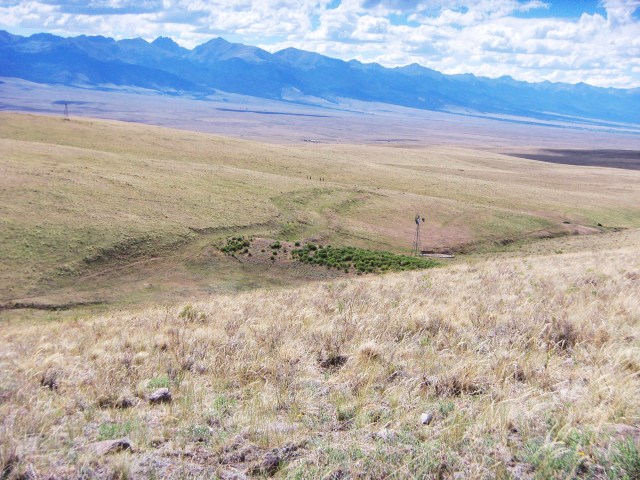 The land fries. Our pond, our grass, all dry

Type “Ascending Lark” into your search engine and hear Vaughn Williams for yourself. And if not Vaughn Williams, maybe you would like to hear the winners in the popular music category. The Beatles won by a landslide. The top four were Hey Jude, Here Comes the Sun, Yesterday, and Eleanor Rigby.

Everything I think about is colored by the human condition. I vote for Eleanor Rigby.