In an effort to allay their fears, I downloaded and highlighted the February 8, 2012, travel advisory from the U.S. State Department. I looked at Mexico in general and Sonora in particular. 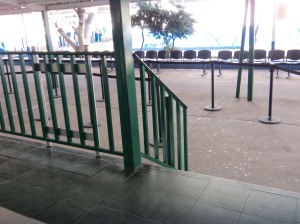 No line. No customers. Get your Mexican VISA here.

According to the State Department, although carjackers will take anything to include junkers, they prefer dark-colored SUVs. Sometimes they will force your car off the road (to include the toll road on which we travelled). 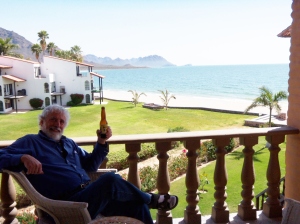 Got it! If we had been stopped, we should have smiled and handed over our worldly goods. As it was… no one stopped us. And here we are… on the beach… supporting the local economy populated by good people.

As puny and as ineffectual as it is, it feels good to have made a stand. We did not get caught in drug cartel cross-fire, and we are here to appreciate all that Mexico has to offer.

These State Department warnings are good… on the other hand…

I remember a trip to Russia. I was travelling independently from Moscow to St. Petersburg on the night “milk train.” At 2 a.m. or so, I left my compartment and stepped into the corridor to see the station at which we had stopped. Was I close to my destination? As I was peering out the window, three soldiers came down the corridor, and I (rather than do the smart thing and step into my room and lock the door)  backed into the doorway to let them pass. And as they passed, each of them groped me. They never paused; they never broke step. My jaw dropped. I was speechless. How could I be so stupid? How could they grope me without breaking step? I was shocked by my own stupidity. I was impressed with the soldiers’ expertise.

It was only after I returned home and happened to be renewing my passport that I read the travel advisory pertaining to night train travel between Moscow and St. Petersburg. Such travel, I learned, was high-risk and to be avoided. Hum.mm.m. If I had read that precaution before I traveled, I may not have taken the trip. As it was, I  took the trip and survived to laugh about it.

We can hunker down in fear, or we can exercise due caution and not cave in. 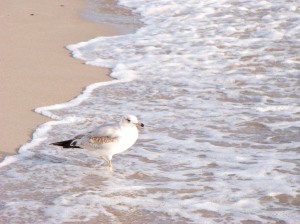 I have lived 100 lives. I write essays, short stories, poetry, grocery lists and notes to myself. If I am ever lost, look for a paper trail, but be careful not to trip over any books that lie scattered here and there. I am a reader. I am a reader in awe of writers. When I don't live in Westcliffe, Colorado, I live in London where I am a long-time member of Word-for-Word - Crouch End.
View all posts by timeout2 →
This entry was posted in Uncategorized and tagged San Carlos, Travel to Mexico. Bookmark the permalink.