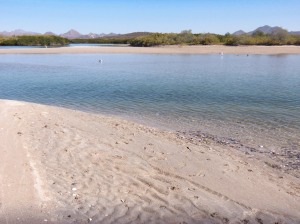 Based on my dismissal of John Steinbeck‘s detailed, marine collecting chapters in The Log from the Sea of Cortez, you might think that I have no interest at all in tidal pools. You are so wrong.

Maybe a half mile down the beach towards Guaymas, we have an estuary. When the wind is too brisk on the beach, I walk to the estuary, hunker down behind the dunes and watch the terns, egrets, and herons hunkering down behind the dunes. Out of the wind, the birds feel safe enough to hang out – oblivious to my presence. 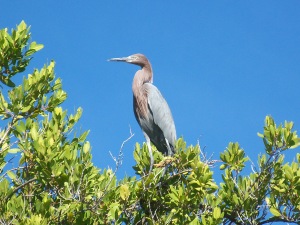 It is quiet in the estuary – the surf and wind a distant memory. The mouth to the estuary is maybe an eighth of a mile at high tide; because of the sandbars at low tide, it is a trick to kayak in: you are left to either jump out and push off or wait for the incoming high tide.

Across the way on a sandbar, young terns break the silence with the ruckus of elephants on a rampage. A hundred small birds call out for food. The adolescents are capable of finding their own food, but why should they when if they whine and moan enough, their weary mothers will bring food to them? I recognize this behavior from watching birds at home. The youngsters, their mouths open opportunistically, line up on the fence next to the feeder and call out to be fed. Sometimes the mothers give in. If not, as a last resort, the sulky birds will sigh heavily and fly to the feeder themselves. 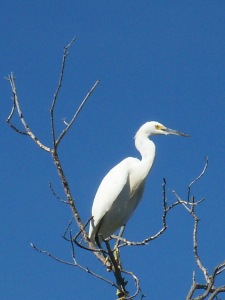 Away from the estuary, back on the beach, we have a more active population. The Vultures are always looking for food, and they can clean a carcass within a half hour. The majority of carcasses are those of cormorants. I am not sure why the cormorants have died, but I have seen three gulls, take turns harassing a cormorant. Like three fighter planes in hot pursuit, they take turns. The lead gull will fly in for the attack, but he cannot quite get close enough. When the first gull tires, he drops back and the second gull flies forward, and so on. They take turns leading the attack and resting. Finally, the cormorant tires, and the gulls take him out. It is not a pretty sight. On the other hand, it is quite amazing to see the gulls working as a unit. In addition to the vultures and cormorants, we have pelicans and sandpipers on the beach. 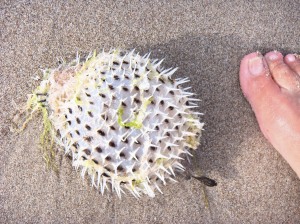 And then there are the “things” that wash up on the beach. Puffer fish (Blow fish / Tetraodoniti) are the second most poisonous vertebrate in the world: just one fish has enough toxins to kill 30 adult humans. In Japan they are prized as a delicacy and are served only by licensed chefs who know that one bad cut in preparation will lead to certain death. I photographed my foot to give you a notion of scale. 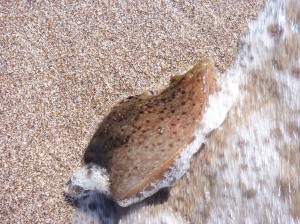 The second delicacy that I find on the beach is the Sea Cucumber also known as a sea slug. But no one wants to eat a slug, so most people favor calling them cucumbers. The cucumber in the photograph was about four-by-six inches. Quite gross. I note that none of the sea birds are tempted to take a bite. Not even the vultures. The Chinese, Japanese, and Vietnamese do enjoy eating them. (I can’t imagine why.) Apparently sea slugs are helpful in controlling hypertension and are thought of as an aphrodisiac. Declining native stock in the early 1980s led to aquaculture in the 1980s. In China, artificial ponds can measure 1,000 acres. This is the stuff of nightmares. Can you imagine falling into a gigantic pond of squirming slime! The best Sea cucumbers are found in the wild by divers off the coast of Alaska.

Skates (smaller Stingrays) are also common here. We are encouraged to shuffle as we wade out to swim or get in the kayak. They are skittish. They only want to flee your feet. If however, you are barbed by one, it is important to soak the wound in water – as hot as you can stand. I am very careful.

What a wild and wonderful world!

I have lived 100 lives. I write essays, short stories, poetry, grocery lists and notes to myself. If I am ever lost, look for a paper trail, but be careful not to trip over any books that lie scattered here and there. I am a reader. I am a reader in awe of writers. When I don't live in Westcliffe, Colorado, I live in London where I am a long-time member of Word-for-Word - Crouch End.
View all posts by timeout2 →
This entry was posted in Uncategorized and tagged puffer fish, San Carlos Baja, sea slugs. Bookmark the permalink.