The Waterman, the green barge across the way.

We are moored at Port Arsenal, Paris. Looking west we can see Notre-Dame. To the north is the Bastille.

Having just read The Paris Wife by Paula McLain, I came to Paris with great expectations. The novel concerns the young Ernest Hemingway and his first wife Hadley Richardson in Paris during the 1920s. Their friends, the artists, writers and hangouts evoke such a longing in me that I want to reach out and touch the magic of the man.

In addition, aboard the barge, I came across a copy of Hemingway Adventure by Michael Palin. Based on pre-trip, tripping, and post-trips notes kept by Palin during the making of a BBC documentary on Hemingway’s life, the book follows Palin following Hemingway’s footsteps from northern Michigan, to Chicago, to Italy, to Paris, to Spain, to Key West, to Africa, and finally to the American West. The entire book is wonderful, but the Paris years particularly so. Given these two books, you would think that I would be out and about – following not only Ernest Hemingway but also Michael Palin.

Perhaps in contrast to rural France, city life is too frantic. I am content to sit on-board and watch the water change color with each passing boat. Nigel treated us to a city cruise aboard The Waterman, and it was nice to see the iconic French monuments from a different perspective. 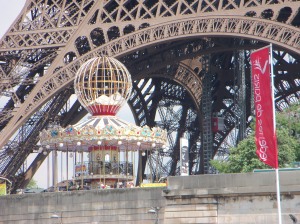 Carousel dwarfed at the base of the Eiffel Tower

The Eiffel Tower looked broader at the base than I remembered, and I had never seen the replica statue of the Statue of Liberty.

Checking the history, I learned that the replica that stands downriver in the Seine was not the model for the New York City statue. Rather, it was a later one by Frederic Bartholdi, the artist who was responsible for the “skin” and Alexendre-Gustave Eiffel, the structural engineer who designed the load-bearing bones.

My research led me to an interesting quote from The Cleveland Gazette, an African-American newspaper. Shortly after our Ellis Island’s Statue of Liberty’s dedication in 1886, a Gazette editorial lambasted the statue:

“Liberty enlightening the world,” indeed! The expression makes us sick. The government is a howling farce. It cannot or rather does not protect its citizens with its own borders. Shove the Bartholdi statue, torch and all, into the ocean until the “liberty” of this country is such as to make it possible for an inoffensive and industrious colored man to earn a respectable living for himself and family without being ku-kluxed, perhaps murdered, his daughter and wife outraged, and his property destroyed. The idea of the “liberty” of this country “enlightening the world,” or even Patagonia, is ridiculous in the extreme.

What a great editorial! Eloquent and pointed, yet witty. And timeless too.

Aside from many rambling walks without intent along the leafy, Paris boulevards and a rabbit-parts pate that was to die for at Chez Paul, the highlight of our brief stay in Paris was attending a concert of medieval music at Notre-Dame. The chandeliers were ablaze, but given the massive size of the cathedral, the interior was nearly dark and led me to imagining the space before electricity. The worn pavers led me to thinking of the countless knees bent in supplication. So much pain and anguish. It’s the looking up that lifts the spirit. 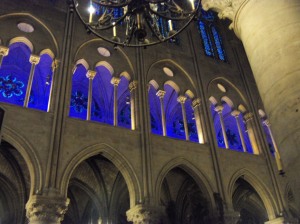 Work began on the cathedral in 1163 but was not completed until 1345. (If you haven’t read Ken Follett’s Pillars of the Earth, I recommend it highly. Although “Pillars” is fiction, it gives a good accounting of the problems involved in the building process.) This building of cathedrals was no small thing. Notre-Dame with its higher thinner walls and many windows would have collapsed if not for the flying buttresses.

Note the scale of the pillars

How amazing that the buttresses don’t look like mere props; rather, they look integral to the whole.

I took two pictures that I find particularly evocative. Contrast the delicacy of the upper and outer wall pillars in the photo above with the pillars that run parallel to the nave. In the picture to the right, you can sense the weight and the scale of the support system. 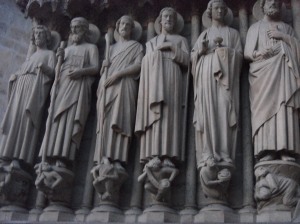 May the Saints be with you.

The sculptures of the saints along the front of the building are highly individualistic and naturalistic. These are men you might meet on the street. How human they are. Not particularly saintly… perhaps there is hope for the rest of us. Most of the statues along the sides of the cathedral have been defaced – according to my reading, either by the Huguenots or during the French Revolution…  after which the catholic cathedral was first re-named the Cult of Reason and later the Cult of the Supreme Being. Now there’s a story just waiting to be told.

For those of us who are so taken with the technology of the iPad, it is good to remember that the melding of art and technology is not the sole provenance of the 21st century. And we are so arrogant to think that we’ve come so far. 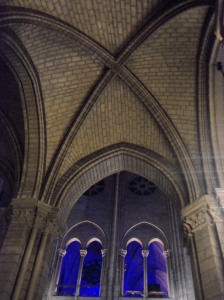 I have lived 100 lives. I write essays, short stories, poetry, grocery lists and notes to myself. If I am ever lost, look for a paper trail, but be careful not to trip over any books that lie scattered here and there. I am a reader. I am a reader in awe of writers. When I don't live in Westcliffe, Colorado, I live in London where I am a long-time member of Word-for-Word - Crouch End.
View all posts by timeout2 →
This entry was posted in Uncategorized and tagged Chez Paul, Eiffel Tower, Frederic Bartholdi, Gustave Eiffel, Hemingway Adventure, Ken Follett, Michael Palin, Notre-Dame, Paris, Paula McLain, Pillars of the Earth, Statue of Liberty, The Paris Wife. Bookmark the permalink.