Slowly I marshal my strength. The Valley is lush, the days are balmy, and the skies are blue. I have lapsed into a semi-comatose state. I’m serene. Only  the Pit Bull spite of primary electioneering has raised my hackles. I bare my teeth and start to slaver, but my anger doesn’t last.  I don’t have time or energy for polarizing partisanship or rancor.

I write in response to the half-page ad that has been running in our local paper, The Wet Mountain Tribune. The ad is in support of  Kit Shy who hopes to win the Republican Primary on Tuesday, June 22.

Shy’s quest is to be elected county commissioner for district three. His contender is Jim Austin, formerly a Democrat, now a Republican. No Democratic challenger is slated for the November, general election ballot.

In the ad, Kit Shy’s supporters claim that Jim Austin has asked Democrats to switch parties to vote for him. The ad concludes with “Legal, yes; Ethical, no.”

Whether or not Jim Austin has asked any Democrats to switch parties is not the subject. The worrisome issue for Conservative Republicans is that many Custer County Democrats have of their own volition with no nudge from anyone changed their party affiliation and with some degree of pride, refer to themselves as RHINOS: “Republicans in Name Only.”

What a perfect acronym! Picture a rhino, his bulk… his thick hide… his horn… and despite his size, his ability to sprint.

Our Constitution assures universal suffrage, and if registering as a Republican to choose a candidate is my only option, I will cast my vote, and I will be heard.

Doing so is legal AND ethical. 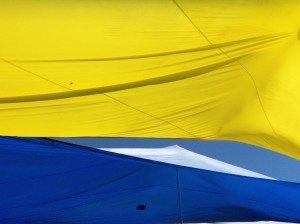 Sit with me under the big tent.

I have lived 100 lives. I write essays, short stories, poetry, grocery lists and notes to myself. If I am ever lost, look for a paper trail, but be careful not to trip over any books that lie scattered here and there. I am a reader. I am a reader in awe of writers. When I don't live in Westcliffe, Colorado, I live in London where I am a long-time member of Word-for-Word - Crouch End.
View all posts by timeout2 →
This entry was posted in Uncategorized and tagged Custer County politics, Jim Austin, Kit Shy, partisanship. Bookmark the permalink.