With its Celtic roots, American Bluegrass took to the soil in Appalachia. From the East coast mountains, it crept like bindweed through the States. Bluegrass musicians may be based in the Bay area or British Columbia, but Appalachia is the bedrock that holds the rootstock.

Custer County’s High Mountain Hay Fever Bluegrass Festival is particularly fun in that it draws people from afar. The tents, campers, and motor homes start arriving on Wednesday and by Thursday, the parking lots are packed with vehicles, sunshades, folding chairs and homemade, pick-up and play-with-friends music. Finger-picking, sharing tunes, and making new friends is what it is all about. And that is just the fans off-stage. 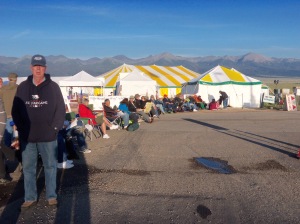 On-stage, the paid performers are the draw that bring the fans. Rows of chairs fan out from the stage. Those who prefer to bring their own chairs line up early. The gate opens at 7:30 for the first performance at 10. Early birds hoping to catch a front row place, arrive before 6:00 a.m. It is a long wait. A thermos of coffee helps to pass the time. It is a good-humored crowd. Everyone’s first question is “So… where are you from?”

If the party to whom you are talking is already wearing a Winfield tee-shirt, you know that they are hardcore fans. If they don’t wear Winfield colors, the second question is “Will you be going to Winfield?” If the answer is “yes,” the two parties are friends for life. (The Walnut Valley Festival in Winfield, Kansas, Sept. 12-16 is a bigger bluegrass festival, but lacking in the heart that we hometowners feel for our very own Hay Fever Festival.) 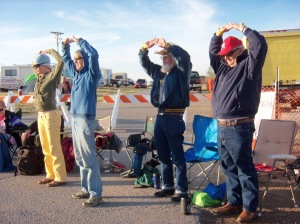 Warm up and Wait.

You need not feel bored while you wait in line because Don Voloshyn, of Ajax Auto Parts, Inc., Arvada, CO, is there to lead you through some warm-up yoga and exercise. What fun! Even people who have only stretched to reach the TV remote control, get in the spirit of things. Seeing Don, lying on the pavement without a yoga mat, you can hardly not join in. What are you? Some kind of wimp? Get with the program – feel the burn. Reaching up, Don encourages, “Bring your arms up… like a butterfly… Don’t tense your neck.” Everyone loves him.

Don’s neck looks tense to me.

Don brings that big-hearted neighborliness that is so representative of the festival. He’s not on the festival payroll; he’s just an attendee… passing time with strangers who are drawn to his warmth and enthusiasm. There’s a lot of reaching out to complete strangers. A rare thing today. A precious thing that we are in danger of losing. The Winfield festival may be bigger, but the quality of our performers and our small town ethos makes our festival stand out.

As for the music, my favorite day is Sunday when in addition to Bluegrass I’m more likely to hear some Gospel, Blues, and old-time Western. Not that there is anything wrong with Bluegrass, but I can only listen to “The Orange Blossom Special” so many times. I can appreciate the talent and the dexterity of the flying fingers, but the speed itself, like so many hornets on-the-wing, leaves me cold. My preference is melodic, moderately slow music with singular instrumentation and clever lyrics.

These boots were made for walkin’.

I always find myself, pencil in hand, writing down phrases from songs that I’ve never heard. Typically, I don’t get the title, but I’ll catch (imperfectly, I’m sure) bits and pieces that catch my attention. I think it was John Reischman and the Jaybirds who sang, “I got these shoes from a railroading man… when I was a younger man, I thought I had a plan.”

The reference to boots caught my attention because I was wearing my party boots. When I was working at the Fremont Family Center, a client came in with a box of high-end boots. As her husband was an inmate in the federal prison, we suspected that the boots were hot. Undeterred, staff members tried on the boots. The inmate’s wife had only one pair in my size. They were an eye-catching pink, turquoise, orange, purple, and green. The gold stars were a bonus. When I asked the price of the soft as a baby’s bottom leather boots, she quoted $70. I am sure that the amount she wanted was a fraction of the original price, but I said that as a charity shop shopper, the price was too high. The inmate’s wife was not open to bargaining.

A couple of weeks passed, and my boss called me into her office. The client had not managed to sell any boots, so she had donated them to the center. What would I pay for the boots that I had admired? I got them for ten dollars. A steal! If you are a size seven and have an important date, you may borrow them. I rent them out… only ten dollars a night.

Our very own hometown Bluegrass musicians, The Dry Branch Fire Squad with Ron Thomason and Sons and Brothers, are my favorite musicians. I know their music; I know the player’s names, and most importantly, I know their back stories. In particular, we hometowners love the sons and brothers of the late Frank Wolking. What a treat it has been to watch these boys grow up, follow in their father’s footsteps and develop their individual musical strengths. They are not my sons, but I would be glad to claim them. I’d have to share: everyone in the county thinks of the Frank and Val Wolking’s sons as their sons.

If you want to get to know Sons and Brothers better, go to their website or take a listen at http://www.somagency.com/sonsandbrothers/index.html

I have lived 100 lives. I write essays, short stories, poetry, grocery lists and notes to myself. If I am ever lost, look for a paper trail, but be careful not to trip over any books that lie scattered here and there. I am a reader. I am a reader in awe of writers. When I don't live in Westcliffe, Colorado, I live in London where I am a long-time member of Word-for-Word - Crouch End.
View all posts by timeout2 →
This entry was posted in Uncategorized and tagged Don Voloshyn, Dry Branch Fire Squad, High Mountain Hay Fever Bluegrass, John Reischman and the Jaybirds, Ron Thomason, Sons and Brothers Band, Walnut Valley Festival, Winfield Bluegrass. Bookmark the permalink.