Looking Poverty in the Eye

I feel soiled. I have been stripped naked by a person who saw through me and found me wanting.

Stopping momentarily at the intersection of U.S.Highway 50 and 115, I paused only long enough to look to the left and right for traffic. Luckily, I didn’t have to wait for on-coming cars: the homeless woman standing an arm’s length away made me extremely uncomfortable.

I couldn’t help but see the woman, but I didn’t dare look. She looked at me, but I avoided eye contact. My pretense was that I was looking for on-coming cars. A glimpse is all I got… all I took.  I never could have identified her in a line-up. If I had looked her in the eye, she would have seen through my fleece and down vest. And what she would have seen would not have been pretty.

Briefly, (as brief as touching a hot wood stove), I saw a middle-aged woman – worn beyond her years. Despite the temperature hovering in the low 30s, she wore sneakers without socks. Did she wear a hat? I don’t know. Was her coat warm enough? I don’t know. All I can say for sure was that an aluminum beverage can was on the ground at her feet. She held a large, hand-lettered, cardboard sign. In black Magic Marker, she had written that she would “do anything” for money. 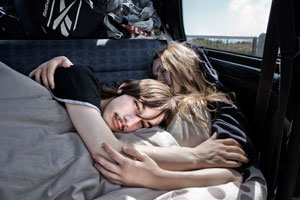 photo by Bryan Rowe
Home is where you find yourself.

Seeing and being seared, I was consumed with guilt. When sitting in a heated seat of a turbo-charged Volkswagen filled with groceries, you cringe when meeting a person-in-need who could use a helping hand.

I briefly wondered what doing anything might include. I had one, ten-dollar bill in my wallet. I could have given it to her. After giving her the money, I might have asked her if I could take her picture. We might have had a chat. Perhaps I could have learned of her circumstances, the life that she had led and left. I wondered if having your picture taken when you are not looking your best falls under the category of being willing to do anything.

photo by Bryan Rowe
“Hard Times” Brother, can you spare a dime?

I briefly marveled that during my three or four-second stop, so many thoughts could sprint through my mind. The coast was clear: no cars were coming. I stepped on the gas and out of the corner of my eye, I caught the woman giving me a bit of a wave.

Heading north I thought about turning around. I could give her the ten dollars and use my credit card to buy us lunch. She could get off her feet and warm up. I hadn’t seen a backpack. Perhaps she wasn’t homeless. Perhaps she was local. Meanwhile, I had driven past Subway where she might have come out of the cold and had a bite to eat. I still had time to turn around.

Juxtaposed with Thanksgiving and giving thanks, my remorse was/is severe.

Next time, and there will be a next time, I promise to do better.

Because I took no pictures of my own, I’m using photos taken by Bryan Rowe, formerly of South Africa, currently of Boulder. Find him at http://www.bryanrowephoto.com. I discovered his photography a few years ago in London. His “Hard Times” exhibit was on display at St. Martin’s-in-the-Field. I found his subjects compelling. I could not look away. Because the subjects weren’t looking at me, I had the emotional distance to look and see.

Quoting from his website, a reviewer of his work wrote: “He strives to reveal a side of our world that is ever apparent but often overlooked, capturing images that hope to elicit a visceral reaction.”

If you are reading my blog on Facebook, you need to go directly to my website to see Rowe’s photos. Be prepared to see beyond the surface.

I have lived 100 lives. I write essays, short stories, poetry, grocery lists and notes to myself. If I am ever lost, look for a paper trail, but be careful not to trip over any books that lie scattered here and there. I am a reader. I am a reader in awe of writers. When I don't live in Westcliffe, Colorado, I live in London where I am a long-time member of Word-for-Word - Crouch End.
View all posts by timeout2 →
This entry was posted in Uncategorized and tagged "Hard Times" photo exhibit, Bryan Rowe, homlessness, poverty. Bookmark the permalink.

8 Responses to Looking Poverty in the Eye