Prior to walking El Camino, I read a number of books. One was by the Brazilian author, Paulo Coelho who gave numerous tips on how to pilgrim your way “in the moment.” One suggestion was to dig the fingernail of your index finger into the quick of your thumb. Should your mind wander, you were to repeat (with increasing duration and intensity) until you got it right.

Granted, my mind wanders, but what a delightful ramble it is. Sunday, for example, I was slogging my way up steep bit, and I found myself behind a day-tripping family of three. Dad strode ahead. The mother had the three-year-old by the hand. By way of motivation, the mother was singing childhood songs in French. The scene took me back to hike-singing with our children. The tuneful music was lovely. As I kept pace with then, it crossed my mind that perhaps the mother was singing to also help me keep up.

And then the child faltered.  Picking up her daughter, the mom carried the child on her hip. No doubt, I thought, I’ll overtake them now. But no… it was all I could do to keep up. All of which reminded me of an earlier experience: for a number of years, our family ran the Boulder Bolder, a 10K race. And one year, based on my predicted finish time, I was placed immediately in front marching recruits from Fort Carson. I was quite pleased to be marching to a sergeant’s sung cadence. What could be better? Despite the advantage of marching with a unit, I fell behind. But not to worry. At this juncture I found myself behind a one-legged woman wearing a prosthetic. “Ah, I’ll keep pace with her!” Which I did. Until she sprinted over the finish line… leaving me to eat her dust.

As for this stroll down memory lane, I wasn’t technically “in the moment,” but I wasn’t obsessing about local, national, and international politics either. Writing as a former (as of a couple of weeks ago) political junkie, this pilgrimage has truly taken me away, and the history, architecture and landscape have taken me in.

I am a new woman. New and improved. I should come with label. We have left Navarre, and are now in Rioja. The good news is that we have found the wines of Navarre to be most pleasing. The bad news is that you find vineyards on slopes – nice for the grapes; not so pleasant for a woman loaded down like a Welsh pit pony.

The paths vary. My favorite paths are either strewn with pine needles or leaves. The scent of both is easy on the nose – a foretaste (fore-smell?) of fall. Second ranking paths are either dirt, cinder or roadbase. Paved paths are OK, but not ideal. Third in order are stony and muddy paths. And last are the historically interesting, but murder-on-the-feet, Roman roads. What a lot of work was involved. Stones were laid lengthwise down the middle of the path, and the soldiers/slaves added stones to either side. Given the terrain, a more difficult task for the Romans based in Northern Spain than in England.

We have left the grazing sheep and cattle and moved on to intensive cultivation as far as the eye can see. There are no small-holdings in this locale. I’m reminded of the horizon-wide  collective farms of Russia. In the distance, mile-high hay stacks. To the right, tractors plowing and harrowing; to the left, manure spreading. The hills call for contour plowing, and the various plowing patterns lead me to think of Japanese Zen gardens. Freshly spread manure smells pungent, yet sweet. The grape harvest is in full swing. 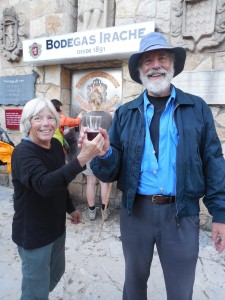 Lynn Prebble and Mark Dembosky sample this years grapes at the fountain.

Several villages have already celebrated with all-you-can-drink wine fountains. The asparagus, the dirt piled high to keep the stalks white, has yet to be harvested. The sunflowers are in a sorry state: their heads hang heavy with black seeds, their stems bent, at the mercy of the birds. The wild blackberries that border our path are nearly finished. What a blessing the berries have been… their tartness freshening our mouthes more effectively than water.

I have lived 100 lives. I write essays, short stories, poetry, grocery lists and notes to myself. If I am ever lost, look for a paper trail, but be careful not to trip over any books that lie scattered here and there. I am a reader. I am a reader in awe of writers. When I don't live in Westcliffe, Colorado, I live in London where I am a long-time member of Word-for-Word - Crouch End.
View all posts by timeout2 →
This entry was posted in Uncategorized and tagged Paulo Coelho, pilgrimage, Roman roads, walking to Santisgo de Compostela, wine harvest in Navarre and Rioja. Bookmark the permalink.

6 Responses to Vine to Wine