As planting season approaches and I load bags of compost and other soil additives into the car, I wonder: how is it that I can religiously follow planting directions and yet, often as not, despite my careful mothering, my baby plants wither and die? And yet, driving down the Hardscrabble, I see sky-high, untended evergreens growing out of rock crevices? Is Mother Nature laughing at me? Maybe she is just putting me in my place. 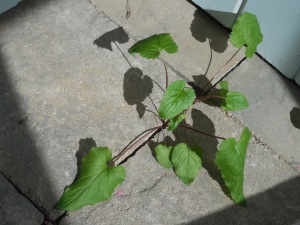 Close to home, within the confines of our east facing air-lock, plants have been shouldering their way between the stone pavers. They don’t just survive; they thrive. One plant looks a bit wilted this morning: do you think I should water it?

Along these same lines, I was quite taken this morning by a poem that came to my in-box via <www.americanlifeinpoetry.org>. The poem, “First Morel,” by Amy Fleury was chosen by Ted Kooser, U.S. Poet Laureate.

The poem reads: Up from wood rot, / wrinkling up from duff / and homely damps, / spore-born and cauled / like a meager seer, / it pushes aside earth / to make a small place / from decay. Bashful, / it brings honeycombed news from below / of the coming plenty / and everything rising.

How neatly this poem dovetails with the volunteer plants in our airlock. How neatly this poem echoes my own rising up to immerse myself in all things Earth. I think I’m somewhat of a Pagan. (Dare I write “pagan” when asked for my religious affiliation next time I’m hospitalized? If I do so, will the healthcare professionals refuse to answer my call button?)

I’ve been thinking about Pagan practices since my visit to Finisterre, Spain. Originally, I had planned to walk to Finisterre at the completion of our pilgrimage to Santiago, but given my foot injury, my husband and I ended up taking the bus.

Standing on the eastern-most landmass, I looked over the Atlantic and saw only sea to the far horizon. And it was easy to channel the wonder of primitive people who stood on the same spot marveling as the sun passed overhead and was extinguished in the water. The wonder of it all, not just the hot sun being dosed in cold water, but the fact that in the absence of cloud cover, another sun reappeared the next day in a repeat performance. What a trick! Man would have to invent a god. How else could he explain this miracle? It is no surprise that Land’s End was home to Druidic masters who spread their gospel at the Altar to the Sun, Ara Solis.

Recent archeological excavations evidence human habitation at Finisterre for over 1,000 years BCE. The Green Man, a Pagan symbol of rebirth, was worshiped by the Celts and recorded by Greco-Roman historians. He remained popular during the Middle Ages. And is still with us – more so in the British Isles and Europe than in the Americas.

The Grove at Hillside

Several years ago, I stopped at Hillside, Colorado, and there hanging from the limb of an ancient tree was a Green Man fashioned out of a coat hanger. I don’t remember if he had a face, but his body was clothed in green vegetation. I was so taken with this unexpected pleasure that I thought about putting an ad in the local paper. Something to the effect “would the person who hung the Green Man behind the Hillside post office, please call me at 719-783-2697.”

Last week hoping to take a photo of the Green Man, I returned to Hillside. Unfortunately, the Pagan Green Man had been removed. But as serendipity would have it, that same day a friend brought me back issues of Orion Magazine: nature, culture, and place. What a treasure trove! Wonderful writing, photography, and art on man and his place in the natural world. Check it out at <www.orionmagazine.org>.

Gracing the cover of the May/June 2011 issue, was a feminist version of the Green Man. And why not? It is always Mother Nature to whom we refer. Surely it is time to see her clothed in green.  I love the Tudor ruff, the pearls, the golden bodice, and the ruby pendent. Madeline von Foerster painted Mother Nature. The title of Foerster’s painting is “Invasive Species.”

Are the plants invasive or is man? Man, I think.

I have lived 100 lives. I write essays, short stories, poetry, grocery lists and notes to myself. If I am ever lost, look for a paper trail, but be careful not to trip over any books that lie scattered here and there. I am a reader. I am a reader in awe of writers. When I don't live in Westcliffe, Colorado, I live in London where I am a long-time member of Word-for-Word - Crouch End.
View all posts by timeout2 →
This entry was posted in Uncategorized and tagged American Life in Poetry, Amy Fleury, Celts, Finisterre, Land's end, Madeline von Foerster, Mother Nature, Orion Magazine, pagan, Ted Kooser, The Green Man. Bookmark the permalink.