No one in his right mind would think of driving from Colorado to the Gulf Coast of Texas. And yet… we did drive. We love the allure of a roadtrip that teases us with what lies beyond the bend in the road. If my husband and I can avoid the Interstates, we do so.

Before leaving Westcliffe, we looked at the Texas map. We had driven the Texas Panhandle before. We remembered the landscape. Our memories were tainted with the flat terrain, the pungent smell of oil wells and blizzards of cotton field lint. We wondered if there was a better route.

You know those dotted lines – the ones that indicate a scenic by-way on the Atlas? Colorado has plenty. Well, much to my surprise, the Texas Panhandle also has a scenic by-way. We took state highway 87 from Clayton NM, and followed it east to Stinnett TX where we picked the dotted line and headed south along SH 207 to Dickens, east of Lubbock.

Some, discerning tourists with really high expectations as to what constitutes a scenic by-way will be disappointed. So I guess I’ll have to “sell” this adventure. True, there are no mountains, waterfalls, or wineries. Feedlot smells permeate the air. Scrub marks the terra-cotta colored dirt. An iconic Phillips 66 stands forlorn. The streams are dry; the rivers are streams. The Canadian River is dry.  The drought sticks to the roof of your mouth. Small, tumbleweed towns hang on by a thread. Empty stores stare vacantly out on Main Street.

The movie theaters have been cobwebbed for years. Abandoned and forlorn, they underlined my appreciation for Anne Relph who single-handedly has saved our hometown Jones Theater. She has not only saved but improved and expanded the facility. In addition to screening movies, Relph has built an ambitious Performing Arts Center that hosts a wide variety of live entertainment and an ambitious summer theater program. (See http://jonestheatre.com.)

This past weekend, the Jones Theater hosted a dance program performed by students of the Second Street Studio .  Next Sunday, look for the Boulder Bassoon Quartet. Thank you, Anne Relph

I’ve digressed – traveling back to Texas… Stay with me if you are thinking, “And this is a sales pitch!”

On the plus side, the speed limit is 75 mph (think 79 mph), and you will be the only car on a most excellent road that puts Colorado’s infrastructure to shame. Also, rather than flatland, the terrain rolls. Ranked like soldiers, wind turbines stand ready along the ridge lines. By the end of March, much of the soil has been tilled, and water reel, travelling, irrigation sprinklers- looking like genetically-engineered, humped backed insects- hiss water on the fresh soil. (How much water in the seven-year drought?  Time will tell.) The topography calls for contour plowing. The serpentine patterns in the fresh soil are truly beautiful – reminiscent of a Japanese garden hand-raked by a master gardener.

Flowers are beginning to bloom. Squinting for an Impressionistic effect, I see a blur of orange, yellow, blue, and pink – punctuated here and there by an invasive (but lovely) white Russian thistle. I think of Lady Bird Johnson. Her wildflower campaign which has proven successful must in some small measure lessen the pain of losing her fight to limit the size and number of billboards.

The highlight of the scenic by-way is the Palo Duro Canyon four miles west of Silverton. The approach to the red rock canyon reminds me Sedona or closer to home, Garden of the Gods. What a treat for sore eyes! The canyon itself has been flooded, and the reservoir is now known as Lake Mackenzie.

First explored by Coronado, the canyon has a colorful history. Prior to building the dam in 1972, archeologists excavated over 77 sites on the canyon floor where they discovered numerous artifacts to include a 10,000-year-old bison kill.

I find it strange that the reservoir was named Lake Mackenzie after Colonel Ranald S. Mackenzie who marched from present-day San Angelo, Texas to punish hostile Indians along the headwater of the Red River. On September 25, 1874, he launched a surprise attack against a large encampment of Cheyenne, Kiowa and Comanche.

More than 1,400 horses and mules were captured and the winter’s supply of food was destroyed. A few of the best horses were saved, but the rest were slaughtered. The Native Americans had no choice but to accept life on the reservation.

A sad story. It is time for Texas to re-name the reservoir. Unless, of course, the naming is thought to encourage Texans to remember/debate the history behind the name. What do you think?

Yes, there is more to our Texas trip than the scenic route through the Panhandle, but I am out of time. My husband is out-of-town for nine days, and I have vowed to write (to write other than to blog) for at least five hours a day. Gotta go. Promise to return with a blog about our visit to Goliad, TX.

Stay tuned if you want to read about Goliad’s 1836 flag. 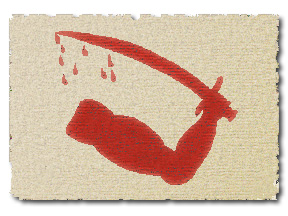 This flag does not belong to ISIS.

I have lived 100 lives. I write essays, short stories, poetry, grocery lists and notes to myself. If I am ever lost, look for a paper trail, but be careful not to trip over any books that lie scattered here and there. I am a reader. I am a reader in awe of writers. When I don't live in Westcliffe, Colorado, I live in London where I am a long-time member of Word-for-Word - Crouch End.
View all posts by timeout2 →
This entry was posted in Uncategorized and tagged " Westcliffe CO, Anne Relph, Colonel Ranald S. Mackenzie, Goliad TX, Lady Bird Johnson, Lake Mackenzie, Palo Duro Canyon, The Boulder Bassoon Quartet, The Jones Theater. Bookmark the permalink.

3 Responses to The Scenic Texas Panhandle