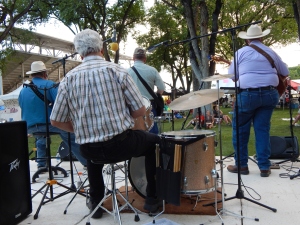 Last night’s entertainment out at the fairgrounds in Hotchkiss was home-spun and entertaining. Music was provided by North Fork Country, and I was disappointed that out of all those local families picnicking on the grass, no one (with the exception of a dad and his three-year-old son) got up to dance. It must be depressing to be playing your heart out, and have everyone sitting like bumps-on-a-log. Those at the fairgrounds should have danced: the music was danceable. 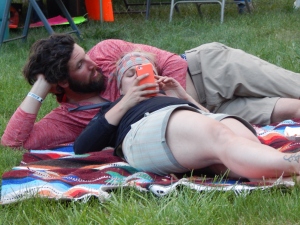 Talk to me, Baby!

Many of the local residents took their ease on the grass. Some found lying in the grass romantic. Some were distracted by social media. (Silly girl!)

As for Team Silver Cliff/Westcliffe, I think everyone crashed early in expectation that the third day’s ride would be another killer.

From the get-go, day three of Ride the Rockies did not look promising: at 6:30 when our riders set out, they did so to the accompaniment of thunder, lightning and rain. 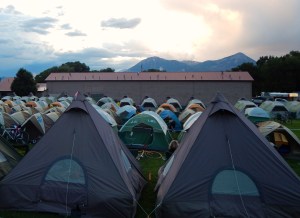 A hard rain is gonna fall.

Some cyclists stay in motels. Others stay in tents. Those who tent can choose between taking their own tent or using a commercial/hotel tent like the tents in the foreground. If you rent-a-tent, you sleep in an assigned tent, but you do not have to set it up or take it down. Very sweet. Others, sleep in the gym. Mark and I, toting mats and travel sacks, chose to sleep in the gym. It is a powerful thing to sleep cheek-to-cheek with strangers who are on the same pilgrimage as you. At home, in our very own beds… isolated from our neighbors… it is easy to think about out differences. In one place – sharing sleeping quarters, and bathrooms… spitting simultaneously into the same sink, you celebrate your commonalities. 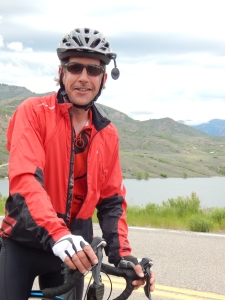 Tuesday’s route was shorter than yesterday’s marathon ride from Grand Junction, but pedaling 79 miles and climbing 6, 000 feet was not child’s play.

Lori Fox had an entirely different take on the rain. She said that when riders stopped at the first aide station for pancakes, huddling together for warmth and shelter, the sheriff stopped to see if anyone was suffering from hypothermia.

A dozen riders were cycling under the banner of “Adaptive Sports.” Good for them! If Ride the Rockies is difficult for cyclists with two arms and two legs, you can well imagine the True Grit of Wounded Warriors who are sportsmen plus. Imagine having to call on mental, spiritual, and physical powers times ten.

Blue Mesa Reservoir was absolutely gorgeous today –sparkling and clean as though cleansed by the rain. Blue Mesa is home to three reservoirs, but with one hundred miles of shoreline, the “Reservoir” feels more like a lake than a hydro-electric utility. 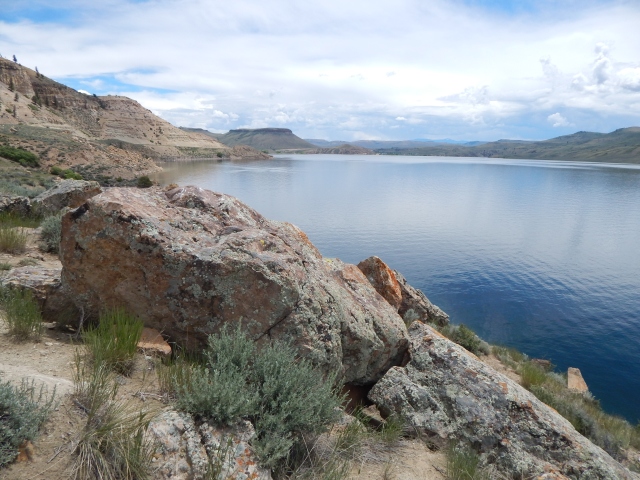 Blue Mesa and the Gunnison River form the largest, Kokanee Salmon fishery in the United States. If any our riders try tell you about the trophy fish they caught, don’t believe them.

They’ve been too busy to fish.

I have lived 100 lives. I write essays, short stories, poetry, grocery lists and notes to myself. If I am ever lost, look for a paper trail, but be careful not to trip over any books that lie scattered here and there. I am a reader. I am a reader in awe of writers. When I don't live in Westcliffe, Colorado, I live in London where I am a long-time member of Word-for-Word - Crouch End.
View all posts by timeout2 →
This entry was posted in Uncategorized and tagged Adaptive Sports, Blue Mesa, Hotchkiss, Kokanee Salmon, North Fork Country, Ride the Rockies, Team Silver Cliff/Westcliffe, Wounded Warriors. Bookmark the permalink.