By five this morning, our Ride the Rockies team was chomping at the bit – rarin’ to go. They were antsy – checking and rechecking their watches for departure time. Sipping coffee. Pacing. Layering up to fight the cold.

While they layered up, I scraped ice off the windshield of my car, and finally at 5:45, they were off…    looking forward to pancakes at Almont Aide Station.

Thursday’s route, featuring 103 miles and an elevation gain of nearly 6,000 feet, promised to be the hardest of the tour. Leaving Almont, the team continued east and up, to Taylor Park Reservoir at which point, the pavement ended and the hard-packed dirt began.

Dirt. Thirteen and a half miles of dirt      can be tricky – especially when encountering rain or snow… especially when the ascent climbs a grade that varies between seven and ten percent. The goal was to reach Cottonwood Pass straddling the Continental Divide.

Reaching the pass, they took a deep breath, soaked  up the scenery and screamed down the third highest paved road in Colorado. The descent was more fun than grunting up the unpaved approach from the west but equally challenging in terms of speeding down a ten percent grade with numerous hairpin turns. Speed is addictive and dangerous. It is all too easy to imagine a rider pancaked against a tree on one of the switchbacks.

Reaching Buena Vista, it was a short uphill ride to Mt. Princeton and downhill to Salida. 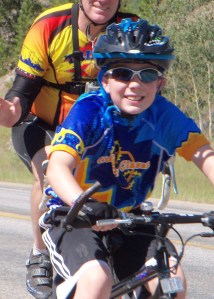 Families suffering on a three-day ride through Summit and Lake Counties. Remembering and giving thanks.

They ride in memory of a child lost;

they ride in thankfulness for a child saved.

Time – time means nothing to them.

Dewey dives into the ice cream.

I have lived 100 lives. I write essays, short stories, poetry, grocery lists and notes to myself. If I am ever lost, look for a paper trail, but be careful not to trip over any books that lie scattered here and there. I am a reader. I am a reader in awe of writers. When I don't live in Westcliffe, Colorado, I live in London where I am a long-time member of Word-for-Word - Crouch End.
View all posts by timeout2 →
This entry was posted in Uncategorized and tagged Almont CO, Buena Vista, Childrens Hospital - Denver, Cottonwood Pass, Mount Princeton, Ride the Rockies, Salida, Taylor Park Reservoir, the Continental Divide, The Courage Classic. Bookmark the permalink.