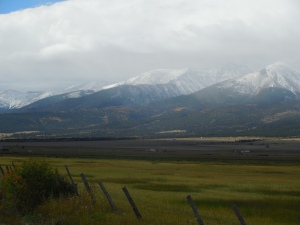 Autumn is running late this year. The days continue Indian-Summer-mild with Waterford crystal mornings and brilliant sunny afternoons. But I’ve lived here long enough to be cautious. Last year on September 30th, I took the featured image at the top of this blog. Colorado weather can change in a heartless beat. Last year I luxuriated in the mild weather and was caught short by the September snow.

This year, I am more cautious. Yesterday I brought the geraniums inside the airlock to winter-over. They are weighty with blooms and buds. At some point I’ll cut them back, but the brutality of pruning makes me wince.

Just recently, after watching the Republican candidates swagger, spar and lock horns during their most recent debate on the 17th, I went to http://www.politifact.com to check the veracity of their statements.  The new site comes courtesy of the Tampa Bay Times’ research and reporting staff. Their mission is to rate the accuracy of statements made by politicians.

If you read my last blog, you know that I’m collating essays, poems, short stories and some Wet Mountain Tribune columns from the past. To underscore the adage “There’s nothing new under the sun,” I just came across one of my old TimeOut columns published January 31, 2008. The topic? The very same: truth in politicking.

The Pulitzer Prize-winning Politifact website is the same, but back in 2008, politifact was written by the St. Petersburg Times’ staff and was more specific than the current version. In 2008, evaluations were more detailed: the name of the researcher who was responsible for the rating was given. Also, the reporter gave his primary and secondary sources which you could bring up with a click of the mouse. Nonetheless, the current truth-o-meter is only poor (less comprehensive) in comparison to the earlier version.

Borrowing from “Dragging the Net, ” I’ll share my earlier, nothing-has-changed thoughts on campaign truths as published in the 2008 Trib.

I like to think that I can laugh with the best of them, but on occasion, I know that I come across as humorless. My expression (genetic by way of my mother) suggests that butter wouldn’t melt in my mouth. Such was the case yesterday when an acquaintance forwarded an attachment that is making the rounds. The attachment began by re-capping the reputed UFO landing outside of Roswell, NM in 1947.

The attachment then listed all the politicians who were born nine months after the UFO landing to include Al Gore, Jr., Hillary Rodham, John Kerry, Bill Clinton, Howard Dean and Nancy Pelosi.  After the names, the text read: “See what happens when aliens breed with sheep? No wonder they support the bill to help illegal aliens.”

To be honest, I did semi-snort a chuckle, but it was short-lived. I hate racist, sexist, and ethnic jokes. I hate political jokes that paint all party members with the same broad brush. A broad brush stroke is nothing short of a smear. When it comes to politics, I like to drag the net. I’m more of a Joe Friday kind of girl. “Just the facts, Ma’am” works for me.

And to that end, thanks to the Internet, the facts are at our fingertips. A number of reputable websites stand ready to dispute, refute, and sift the facts from fiction. My favorite site is http://www.politifact.com. The truth-o-meter allows you to learn the truth in speeches, ads, and interviews. To the left, you have a politician’s quote (stating a personal belief or misrepresenting an opponent’s belief or performance record), and to the right, an image of a meter. The meter’s needle indicates the relative truth. Sometimes the misrepresentation is so egregious, you see liar, liar, pants-on-fire.

A second site designed to separate fact from fiction is http://www.FactCheck.org which is sponsored by Annenberg Public Policy Center of the University of Pennsylvania. A third site is http://www.washingtonpost.com/blogs/fact-checker.

Should all these facts spin you down the wormhole of depression, a little humor might help. If you are a fan of political cartoons, check out http://cagle.msnbc.com/politicalcartoons.

And to think that we have more than a year to go before the  2016 election! Hang on to your hats (and sanity); we have a lot of half-truths to sort through before we go to the polls.

I have lived 100 lives. I write essays, short stories, poetry, grocery lists and notes to myself. If I am ever lost, look for a paper trail, but be careful not to trip over any books that lie scattered here and there. I am a reader. I am a reader in awe of writers. When I don't live in Westcliffe, Colorado, I live in London where I am a long-time member of Word-for-Word - Crouch End.
View all posts by timeout2 →
This entry was posted in Uncategorized and tagged " Pulitzer Prize, "Just the facts, Annenberg Public Policy Center, FactCheck, illegal aliens, Joe Friday, Ma'am, NM, political campaigns, political cartoons, PolitiFact, Roswell, St. Petersburg Times, Tampa Bay Times, The Sangres, truth-o-meter, Washington Post, Wet Mountain Tribune. Bookmark the permalink.

1 Response to Truthfulness in Politicking