And Your Relatives Came From Where?

What would I do without my writer friends? Their support is crucial to my writing. Their work inspires me to up-my-game. Alternating hugs with sharp elbows, they nudge me forward. One such friend is Brian Docherty, former leader of Word for Word, a vibrant writers group based in Crouch End, London.

Brian’s Christmas letter consisted of a poem and a picture of Steve Jobs. You know Steve Jobs – certainly there was a lot more to Steve Jobs than Apple and the birth of personal computers, but if it weren’t for Jobs and Steve Wozniak, I wouldn’t be typing at-home with a computer on my lap. 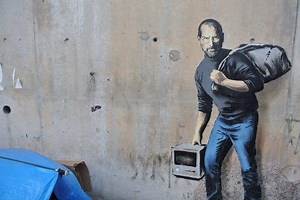 A photo of Banksy‘s politically inspired graffiti in support of refugees shows Steve in his trademark turtleneck. His sleeves are pushed up (a sign of a hands-on working stiff), and he leans forward into the wind. In his right hand he carries the Apple I. He carries his belongings, hobo-style, in a Santa sack over his shoulder. The picture is emblematic – a reminder that Steve’s father was Syrian.

The unasked question is, “And where would we be if Steve’s father had not made it to the United States?”

In short, Steve Jobs’ birth father was Abdulfattah (John) Jandali of Homs, Syria. His birth mother was Joanne Carole Schieble, an American who met “John” when he was a teaching assistant and PhD candidate in political science at the University of Wisconsin. The unmarried couple returned to Homs and during that time, Joanne became pregnant. Because of the religious and ethnic parental dismay of both families (to say nothing of the issues surrounding an unplanned pregnancy) Joanne returned to The States, and without the birth father’s knowledge, gave up the baby for adoption.

Brian introduced his poem “One More Thing” with a phrase from W.H. Auden: “We must love one another or die.”

We are all refugees now, and always were, / we all came from Somewhere, / Nobody knows where now, not even David Attenborough; / our song still “I am a pilgrim and a stranger”; / if you think you or your clan own the ground you stand on, / you’re a few steps short of a dance card. / Wake up, keep moving, shuffle, / two step, trip, move towards that shining shore, / under the sun, under the cold cold stars, / we are all someone’s kinfolk, all one family, all with baggage, / we all have something to share.   copyright Brian Docherty. 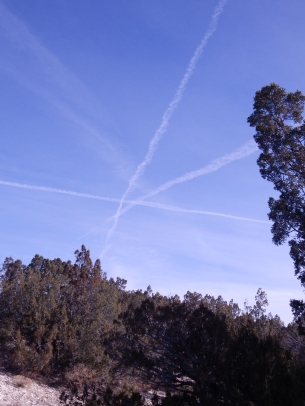 And we are mobile: we are not where we were yesterday. I grew up in Horseheads, New York, and since leaving home for college, I’ve lived (not to be confused with ‘visited’) in both Buffalo and Albany NY, Ohio, Spain, Michigan, Connecticut, Arizona, New Mexico, Russia, England, and Colorado.

And every place I’ve lived, I’ve met, if not kin, kindred spirits.

Like most of Europe, England is struggling with how best to accommodate the influx of Syrian refugees risking their lives as they leave Turkey and cross the Aegean Sea to Italy. Many of them drown. Like everywhere else, the debate is heated between the open-door humanitarians, the wary pragmatists and those who fear an influx of terrorists.

The questions are obvious. How do we accommodate the refugees, and given the New Year’s Eve mass-groping-incident in Cologne, how do we assimilate a large number of people who do not necessarily share Western culture? 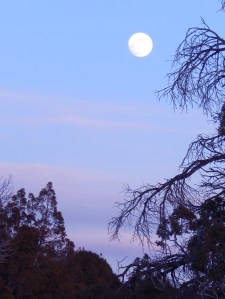 Because of fear mongering, we Americans have hunkered down, shut the windows, and slammed the door. Sadly, we have accepted only 2,647 out of 4.5 million Syrian refugees.

Maybe we need to get up-close-and-personal with five Syrian families who have made it to The States. To that end, I’d like to recommend a New York Times Magazine cover story: Eliza Griswold‘s article, “Why Is It So Difficult for Syrian Refugees to Get Into the U.S?” http://www.mytimes.com/2016/01/24/magazine/why-is-it-so-difficult.

If we could just tone down the fear factor, we could share some of Europe’s burden. Although we cannot see the Atlantic or Pacific Ocean from our Heartland,                          we are very much a large island.

I have lived 100 lives. I write essays, short stories, poetry, grocery lists and notes to myself. If I am ever lost, look for a paper trail, but be careful not to trip over any books that lie scattered here and there. I am a reader. I am a reader in awe of writers. When I don't live in Westcliffe, Colorado, I live in London where I am a long-time member of Word-for-Word - Crouch End.
View all posts by timeout2 →
This entry was posted in Uncategorized and tagged Abdulfattah Jandali, Apple I, Bansky, Brian Docherty, Eliza Griswold., Homs Syria, NYT's Magazine, Steve Jobs, Steve Wozniak, W.H.Auden, Word for Word Crouch End London. Bookmark the permalink.

4 Responses to And Your Relatives Came From Where?