Retreat is where I’m at. Yes, I know that if I were a soldier, I could be shot for refusing to come out of the trench, but at this point, we in the States are just in a war of words.

As a person of words, the  tone leading up to November’s presidential election has me clenching my teeth. There’s a bully swaggering down the street. He yells and incites. He disparages and insults. He beats his chest and roars. He gives men a bad name. If he were a Bull dog, he’d be lifting his leg and peeing on everything in sight. It’s his way or the highway. 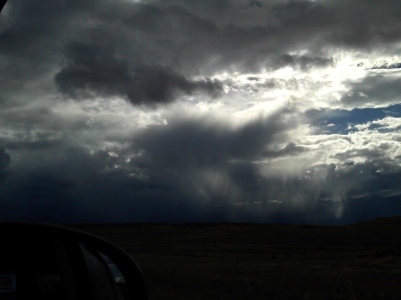 Listening to Trump harangue the opposition and hearing the enthusiastic response of his true-believers makes me wonder if we live in the same country and share what I thought were commonly held American values. Candidate Trump is just one man, but his supporters number in the millions. Hearing the roar of his crowds puts me in a bunker mentality.  I want to cower in the closet.

Going through my writings yesterday, I came upon a long-forgotten poem that I wrote… I’m not sure when… maybe 20 or 25 years ago. I don’t remember the year, but I remember that I was serving on the Fremont County RE-2 School Board, and apparently (based on the tenor of the poem) we were dealing with contentious issues.  Reading the poem titled “In the Trenches,” I was struck how appropriate the poem is in the context of today’s political climate. The poem reads:

I hunker in the trench. / The flack is flying. / Aerial bursts / light the overcast sky. / Gunfire reverberates. / The heat is on. The enemy, / across the way, / won’t turn and run. / If only they’d retreat; / if only they’d surrender; / if only they’d admit / the error of their ways. / If only we could sit / at the round table / and drink from the same cup,  / but we can’t. / We, mere rodents and moles, / cower in the damp earth / breathing the sour, / dank air of the trench. / Our fear is pulpy. / Are we privy to the plan, / or are we pawns / moving blindly on emotion? / “Come out, come out wherever you are!” / Those childhood taunts / sung out on twilight / kick-the-can nights still apply, / but the charm is gone. / Adults don’t play games. / We have more important things to do. / To begin with, we need to deepen the trenches.

Instead of giving in to despair, I tentatively raise my head above the parapet and try to get on with my day. Instead of cowering in the closet, I go outside and take in the landscape. Sometimes I just seek solitude.

I have lived 100 lives. I write essays, short stories, poetry, grocery lists and notes to myself. If I am ever lost, look for a paper trail, but be careful not to trip over any books that lie scattered here and there. I am a reader. I am a reader in awe of writers. When I don't live in Westcliffe, Colorado, I live in London where I am a long-time member of Word-for-Word - Crouch End.
View all posts by timeout2 →
This entry was posted in Uncategorized and tagged Donald Trump, The 2016 presidential contest. Bookmark the permalink.