You don’t have to be Roman Catholic to appreciate the Stations of the Cross in San Luis. If you are leaving from Westcliffe, the drive south on Hwy 69 is always Wolf Springs buffalo-good, and the Pass Creek cut-off at Gardner is always spectacular. Then it ‘s Hwy 160 west to Fort Garland and 159 south to San Luis, the oldest town in Colorado. 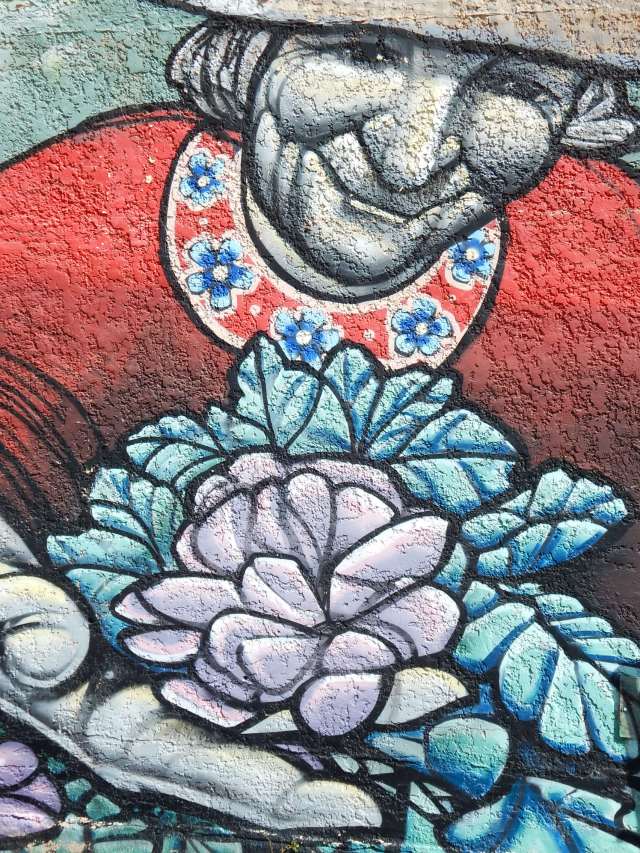 If you know the San Luis valley at all, it is probably in the cont 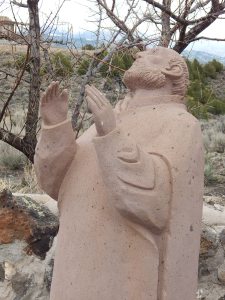 ext of its potato crop. But there is more. Four miles west of San Luis on Hwy 142 is the 1860s Mission of San Acacio. With its 24-inch adobe walls, it is the oldest standing church in Colorado.  San Acacio is also one of nine historic churches on the Sacred Circle Tour. (See http://www.sanluispreservation.com should you be interested in visiting under the direction of a tour guide.)

In addition to the mission, San Luis is home to “The People’s Ditch,” Colorado’s oldest irrigation system. The acequia, a concept brought from Spain and North Africa, brings irrigation water via slowly sloping ditches from the Culebra River. Originally the ditches were dug with wooden shovels by the entire community. All farmers have equal responsibility and access to the 66 active acequias.

The Stations of the Cross are spread out along a mile-long dirt path on San Pedro Mesa above the town of San Luis.  Climbing the rock strewn and cactus covered mesa, your mind travels back to the early settlers – only community, their work ethic and their beliefs sustained them. Below the mesa, the newly minted greening Valley is springing up thanks to through the labors of those early Spanish settlers.

In addition to stones, visitors have dropped rosaries, sunglasses, hair ties, and Sweeties. Some youngster gave up her sweets. How sweet is that!

The Lenten season seemed to be a good time to visit the Stations of the Cross. In my case, this week’s visit was somewhat of a sentimental journey. I have a wonderful memory of walking the Stations of the Cross in Malaga, Spain. My husband and I were staying at a B&B above the city, and our host suggested that we join the neighborhood priest as he and his  parishioners walked the Stations. “And,” she added, “don’t forget to take your stones.” Stopping at each station, the priest would give us pause to reflect on our past sins. And having reflected, we should drop one of our stones thereby lightening our load.

I love this idea. No so much that we are forgiven our sins, but we recognize them and vow to 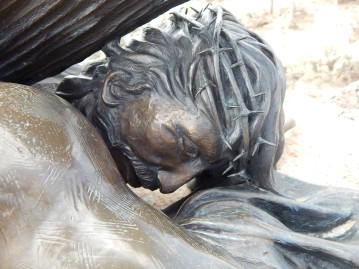 try harder. As sort of a sidebar (and my regular readers know how I love to wander) I might add that in contrast to the Seven Deadly Sins: wrath, greed, sloth, pride, lust, envy, and gluttony, there are the Seven Virtues: prudence, justice, temperance, courage (or fortitude) faith, hope and love. On this week’s visit, I dropped my stones, not so much for forgiveness but for my desire to live a more virtuous life.

The bronze statues that illustrate each station are the work of San Luis native, Huberto Maestas, who studies engineering and science at Adams State but switched his major to art. Today his bronze work (secular as well as religious) can be found in Taos, Santa Fe and beyond to include The Vatican. The statues are moving. The lifelike physicality of the sculptures takes you back in time. You are there.  Your back aches under the weight of the cross. You have fallen. You strive to rise. The hammer is raised; the nail is in place; you are about to be crucified.

Walking up the mesa, you see Capilla de Todos Los Santos, built in 1986. Although the chapel is new, it has a warmth that transcends time. We will return.

I have lived 100 lives. I write essays, short stories, poetry, grocery lists and notes to myself. If I am ever lost, look for a paper trail, but be careful not to trip over any books that lie scattered here and there. I am a reader. I am a reader in awe of writers. When I don't live in Westcliffe, Colorado, I live in London where I am a long-time member of Word-for-Word - Crouch End.
View all posts by timeout2 →
This entry was posted in Uncategorized and tagged acequia, Capilla de Todos Los Santos, Culebra River, Huberto Maestas, Mission of San Acacio, San Luis CO, Stations of the Cross, The People's Ditch, The Sacred Circle Tour, Westcliffe Colorado. Bookmark the permalink.

2 Responses to Stations of the Cross – San Luis, Colorado