When Senator John McCain‘s diagnosis of brain cancer was released a week ago, my hopes soared. Maybe the public’s sympathy for 80 year-old McCain- based on his five and a half year incarceration and torture in North Viet Nam- would bring a modicum of unity to a polarized Congress. Maybe  people would remember candidate Trump’s unforgivable comment that McCain was not a war hero: “He’s a war hero because he was captured? I like people who weren’t captured.” Maybe popular support would bridge the yawning gap between the entrenched Republicans and Democrats. Maybe McCain’s precarious health would bring everyone to the table on health care reform.

But no. Yesterday, Senator McCain voted to advance Republican plans to repeal and replace the Affordable Care Act. Luckily the Senate voted down the repeal. As for a replacement… that is still pending, and any sympathy for McCain has evaporated. McCain’s party loyalty trumped his concerns for others diagnosed with life-threatening illnesses – others who would rely on Medicaid to pay for their treatment. 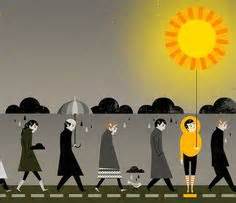 “In a Bubble” Luciano Lozano

I’m so silly. I live in a bubble… always willing a good outcome. I should know better. Believing that reason and fairness will win the day… believing that the sun will come out tomorrow is just wishful thinking.

I love the work of Luciano Lozano. Like the girl in the yellow bubble – hanging onto a sunny day – I have a tendency to believe in the inherent goodness of my fellowman.  Like I said, “I’m so silly.”

Forcing myself to rise above despair, I read good writing and listen to music. Earlier in July, I had the good fortune to catch Westcliffe’s four-day, Bluegrass Festival. Every bluegrass day is a good day, but my favorite day is Sunday when the close harmony of those singing gospel gives me a sense of oneness.

Ron Thomason leading the Dry Branch Fire Squad is one of my favorite performers. Sometimes his storytelling makes me laugh; other times his storytelling makes me think. On Sunday, July 9, he talked about recently seeing prehistoric cave paintings made between 49,000 and 16,000 years ago. His message was about seeing and having faith in the dark. The caves were one half mile deep into darkness. The men who painted the caves had little light and had no means of seeing their entire paintings at one time. And yet, looking at the paintings today, lights off and then flickering on, Thomason could see the horses running towards the entrance of the cave.

The Paleolithic horses were running towards the light. Something for me personally to keep in mind.

To that end, this week forty-four students will attend Jazz Camp this week and study under the mentorship of the Colorado Conservatory for the Jazz Arts. The Denver-based jazz band Convergence opened the week with a concert at Coyote Moon. Undeterred by two members who were delayed (one because of a traffic incident and a second because his car broke down coming up the Hardscrabble) the group performed with aplomb despite last minute stand-ins – a tribute to the professionalism of the core members and the bass and trumpet player who stepped in. And kudos to vocalist Bar Scott who dazzled singing two songs a cappella before one after another the instrumentalists joined her.

Wednesday, July 26 beginning at 6 p.m., you can catch the students in performance at Tony’s Pizza in Silver Cliff. Whatever you do, don’t miss the musicians’ free concert on Saturday the 29th beginning at 11:30 a.m. and running to 3 p.m. See you at the Feed Store Amphitheater on North Second Street, Westcliffe.

Just when you think the future looks grim and getting darker, talented and focused young musicians come to town to give us hope.

You don’t get to lie on a couch but the music therapy is free of charge.

I have lived 100 lives. I write essays, short stories, poetry, grocery lists and notes to myself. If I am ever lost, look for a paper trail, but be careful not to trip over any books that lie scattered here and there. I am a reader. I am a reader in awe of writers. When I don't live in Westcliffe, Colorado, I live in London where I am a long-time member of Word-for-Word - Crouch End.
View all posts by timeout2 →
This entry was posted in Uncategorized and tagged Affordable Care Act, Bar Scott, Convergence Jazz in Denver, Donald Trump, Jazz camp, Luciano Lozano, Medicaid, Paleolithic cave paintings, Ron Thomason, Senator John McCain, Silver Cliff, the Colorado Conservatory for the Jazz Arts, the Dry Branch Fire Squad, Westcliffe's Bluegrass Festival. Bookmark the permalink.