A Plague on All Our Houses

Despite the title, I am hopeful. Being housebound after the longest, coldest winter ever has me straining against the leash. I think that the dog collar around my neck has spikes on it.

Hope springs eternal. A couple of weeks ago, hoping to speed spring along, I opened my Beck’s Catalog and dog-eared pages that would see me ordering flowers for spring. And then, dressed in my L.L. Bean’s flannel-lined jeans (which I had worn for the past months) I photographed some summer clothing  that I might wear to the Texas coast if my flight on April fourth is not cancelled.

Am I stir-crazy? You bet!

And to make matters worse, HP up-dated my computer, and nothing is where it was! Their update is my nightmare. Yes, I am frozen in time, and their up-dates have not enhanced my writing life.

That said, I am writing an article on The Silver Cliff Museum and in doing so, I spent some time at the museum taking photographs. A host of likely topics caught my eye, but THE WORLD TYPEWRITER, manufactured by Pope MFG (also makers of Columbia bicycles and tricycles) caught my attention.

Sometimes I find myself thinking that life would have been easier, less frantic, and slower paced if I were living back-in-the-day, but not necessarily.

Manufactured in 1886, the instructions for using the typewriter read: “To write: place first finger of right hand on cup of pointer, turn to letter desired. With first finger of the left hand, press rocker-bar down until it stops, and release immediately. To space, press down spacer with second finger. Bell strikes near end of line.”

As for spacing, is that the second finger of the right or left hand? Yes! I have been in house-bound too long. Perhaps I will not give up on my computer just yet. 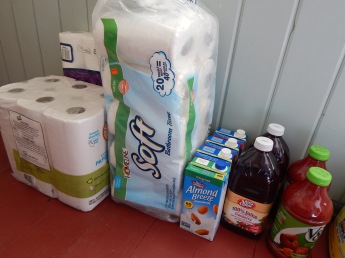 Ready or not. What is not pictured are the diapers and baby wipes for my daughter who can’t find them in Denver.

Prior to staying home to avoid the threat of COVID-19, I bought toilet paper. It was amusing to see the panic… folks with not one, but two carts full of toilet paper.

Curious as to what folks used before using The OLD FARMER’S ALMANAC which hung on a hook in the outhouse, I looked on-line. Upper-class Romans used rose petals. The Scots used sheep fur; sailors used the knotted end of a rope; Native Americans used moss and leaves; and early Americans used corn cobs. The Greeks used a communal  sponge on the end of a long stick which when not in use soaked in a bucket of heavily salted water. Most amusing of all was a 1935 ad from Northern Tissue which claimed that their toilet paper was “splinter-free.”

I figure if you are going to be depressed, you might as well go full-out. To that end, I’m reading Albert Camus’ philosophical novel, The Plague, published in 1947 and currently out-of-stock on Amazon. The last week of February, sales of the Penguin reprint were up 150% over 2019!

If you have any interest, I highly recommend http://www.openculture.com/2020/03/why-you-should-read-the-plague.html. The novel is timely in that you will recognize the authorities unwillingness to call a plague a ‘plague.’ How do the main characters react to the crisis? Do you identify with any character?

If we experience a crisis, how will you react? Do you have enough toilet paper?

Walt Whitman: Whoever is not in his coffin and the dark grave, let him know he has enough.

8 Responses to A Plague on All Our Houses